It's time to get back on track, so I've planned out this week's meals...and not just the family ones like I usually do.
Monday
Ham and egg salad on an English muffin
Midmorning green smoothie
Pita sandwich with hummus, broccoli slaw and tomatoes (with grapes and carrots)
Snack: Apple and PB
Stew and baked potatoes

Wednesday
Oatmeal with fruit and flax
Midmorning green smoothie
Tuna salad pita (with carrots and apple)
Snack: Grapes and pistachios
Dinner at church
Thursday
Boiled egg, oatmeal and fruit
Leave for conference...here it gets tricky because I won't have control of where we eat. My goal is to make the best choices I can...fruits, veggies, lean proteins.

Why does it seem that running is always two steps forward, three steps back?

It seems that double-digit runs in two consecutive weekends is too much for my foot. It's acting cranky again. The pain is different this time and doesn't feel like a stone bruise on my heel, but I'm pretty sure it's still my PF. I'm taping it with KT tape, icing it, stretching it, resting it, and now I've resorted to an insert made for PF.

It's not painful all the time, and it seems fine when I run (typical I know). I did skip this week's speed workout, and I plan on cutting back my long run this week.

It is just so frustrating. I was finally going farther and faster. I was hoping this was an upward trend and a good season of running. We all know that we have our hills and valleys in this sport, times where our runs feel like quicksand and times where we feel like we're flying. I'd come out of a long, slow, hard spell and was hoping to stay away from that for a while...but it doesn't look like that is the case.

With my half about 7 weeks away, I'm getting a little nervous. It's going to take a lot of work to keep my foot healthy enough to run it. Secretly, I had a new PR in mind. That goal may have to change to "finish the race." Disappointing.
Posted by Christy J at 12:48 PM 2 comments:

In an effort to streamline my mornings and make sure I get out the door with my mid-morning green smoothie, I made up some freezer packs last night. I didn't take pictures, but the idea came from Pinterest (big surprise).

In sandwich size zip top bags, I threw in a handful of spinach, a half a sliced banana, and some frozen fruit. I did several mixes...pineapple/blueberry, pineapple/mango, blueberry/strawberry. This morning, I just grabbed a pack, threw it in the Magic Bullet, added water and whirled away. That saved me the time from getting out all the different bags of fruit, the spinach and slicing a banana. Ok, so it doesn't sound that hard, but it was super easy this morning. No thinking invovled.

After making my smoothie this morning, I will say the frozen spinach leaves didn't blend as smoothly as the fresh leaves. I think next time, I might try blending the spinach with water first and freezing this mixture into ice cube trays. Then I'll just put a cube or two in each freezer pack.

I also threw together some smoothies for the kids' lunches. I've had these Ball brand plastic freezer containers for a while, purchased just for this reason, but I've yet to use them. It didn't take long at all last night, especially since I had all the fruit out making my packs.

For SB, I made a smoothie she really enjoyed last week as breakfast...banana, pineapple, blueberry, and milk. One totally full Magic Bullet's worth, made 3 almost-full containers. For Ryan, I have to keep his simple...banana, chocolate syrup and milk. I did add some flaxmeal to his to see if that helps his tummy issues.

I put the screwtop lids on and stuck the smoothies in the freezer. This morning, Chad just put those in with the rest of their lunches. I'm hoping by lunch they are thawed enough to drink/eat. My biggest worry is that they use Pack Its, and I'm not sure if they'll stay too cold to thaw.

If they like the way theirs turn out, I may try blending up my smoothies and freezing them as well. I'm guessing if I took them out of the freezer in the morning and set them on my desk, they'd be perfect by my conference period.

I also have dinner in the crockpot for tonight...terriyaki beef. I am planning on steaming a bag of Asian vegetables and making some fried rice or noodles. I love knowing I don't have to worry about dinner.

It's amazing how a little prep work and planning makes such a big difference.
Posted by Christy J at 7:54 AM 2 comments:

“Failing to plan is planning to fail.”
― Benjamin Franklin

I've got to say, I'm learning this one the hard way again. You'd think I'd have learned it by now.

I didn't plan my winter races well, and I missed out on a chance to do a full marathon in my hometown. Now, with this crazy season of our lives, training isn't really feasible. Lesson learned.

I was eating super healthy during our fast (Daniel Fast for me), and it was all about planning. Once that ended, I quit planning my meals and snacks. While the number on the scale has stayed the same, the way my body has reacted has not. Lesson learned.

School is crazy right now, mainly because I haven't done the planning necessary to take care of all the irons in the fire. And now I'm stressed and behind. Lesson learned.

So, I'm working on planning the things I can control...mainly workouts and food. The food thing seems to make the biggest difference in the way I feel (which carries over to all the other things I  have to do). I've found that if I plan our family meals, my breakfasts, lunches and snacks, I make much healthier choices overall. My mid-morning green smoothie has become something I look forward to...and it helps keep the rest of the day on track. I may have to add an afternoon smoothie!

We're also planning some remodel/redecorating projects. We're almost done painting the living/dining/kitchen spaces in our house. Along with that has come some new decorating ideas, like rugs, prints, etc. The next project is one I'm really excited about...and one that is going to take a lot of planning! We're finally going to turn the garage into a family play room...workout area, TV/game area, kids' area...so exciting! I can't wait!
Posted by Christy J at 2:56 PM 1 comment:

Woohoo! I feel like I'm finally back! Last week was a rough one, and Friday was no exception...really, it was just icing on the cake...and not in a good way. Problems with one kid (as in one of my own darlings, not the ones I teach) at school, long meetings, work stress, and just feeling yucky really took its toll. That's probably when I needed a run most, but I could not make myself get up early for a cold run Saturday. Besides, I had someplace to be by 10:30, and my hubby had a meeting at 9. I really wasn't sure when I was going to run. We ended up going to a do rib joint for a late lunch with friends (much needed!). And then I decided to run. I knew Sunday morning wasn't looking likely with early church and then serving at church for the second service. Granted, running on a full tummy for an afternoon run (not my usual thing at all) was probably not the best idea, but I'm so glad I got out there!

I ended up running 8 last week and knew I really wanted to run 10 this week. I headed out, clicking off the miles by telling myself what percent was done...1 mile, 10% done, 2 miles, 20% done, etc. I was on my own since my sister couldn't join me at this oddball time. I also told myself I had to run faster than the sun was setting. I just barely made that one. It was nice and warm though, around 65...ended up a little pink on my arms. Crazy that it's February!

I'm using the first 5 miles of the run as my 5 by the 5th hosted by Mommy Run Fast. I love virtual races, and a series that keeps me moving each month is even better!

There's a half here in my town March 2, and I could so be ready for that...except I have to be out of town for work that day. Boo! However, I got some great news last week! As a Refuel with Chocolate Milk alum, I will be running the Rock N Roll Half in Dallas at the end of March as part of Team Refuel! I am so stinkin' excited! This will be my fourth half. I ran the RnR Dallas as my first half two years ago, and I'm excited to be going back.

I woke up Sunday to a little pain in my right foot...the same PF pain I've had off and on for a while now. I wrapped it Sunday for most of the morning. I've worked on stretching it. And then last night, I went and got some KT tape. I've never used the stuff. I'm not sure I've got it wrapped right, but it's feeling pretty good, and I was able to run an "easy" 3.5 this morning.

I've debated on going the full mary this spring, but it just doesn't look feasible right now. My husband's work has picked up, he umpires in the spring, and both kids are playing ball this season. I really should have planned ahead and trained through the winter to do the marathon that was here in town in January. Live and learn, right? 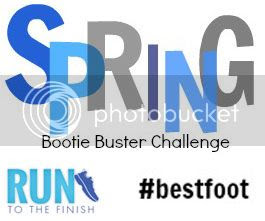