A little behind...in more ways than one

Ok, so things have gotten crazy busy around here and I haven't blogged. I'm still running, but even there, I'm not sure I'm keeping up. I haven't looked at my training plan in over a week...just hopping on the treadmill logging some miles.

I've switched the past two weeks to a Tuesday/Thursday/Saturday pattern. I was supposed to have an 18-mile training walk but we got rained out. I overslept, met the girls at the local college and started walking, only to get a little ways around a walking trail and spent a while under a gazebo watching the amazing lightning. We realized it wasn't letting up so we took off for my car. We all piled in and I drove them back to their cars...so I guess oversleeping wasn't such a bad thing after all. If I hadn't, we would have had a very long wait or a very wet walk.

But that did mess up my running. I didn't get the long walk in or a run. I'm planning on hitting the streets Saturday morning before our church women's coffee. Five miles, I'm hoping. My mother ran an incredible 7 this past weekend! She amazes me.

Right now, I'm focused in a thousand directions...so maybe that means I'm not focused at all :) Here's what's occupying my thoughts:
1. Rangers World Series! Yeah, I think we have plans for every game now.
2. Halloween...got to finish that Josh Hamilton costume (tattoo sleeves...LOL)
3. 3-Day walk...still need a bunch of stuff for that one...and then have to pack it all!
4. School...the kids are finishing up a novel, thank goodness
5. My house...it's a certifiable wreck, and we have people coming over three nights between now and Sunday. Guess that's going to make for a long night for me soon.

Ok, maybe that's not all, but those are the biggies. Running has taken a back burner til after the walk. Then it will be recovery time so I can get ready for the marathon relay. I'm hoping recovery time is short and I can be ready.
Posted by Christy J at 4:02 AM No comments:

Tempo Run, or my version of it

I'm pretty thrilled...I actually felt like I could have gone farther and faster. I'm so glad I made myself get up and on that treadmill this morning!
Posted by Christy J at 7:09 PM No comments:

It's still a battle. I just have not figured out how to make strength training a habit. I know I should just get up at the same time all week and make Tuesday/Thursday my strenth training days, but I just can't get out of bed early on those days. So I had this idea that I could do it Tuesday/Thursday evenings. As dumb as it is, one of my reasons is I have to wash my hair anyways on Wednesdays and Fridays after my runs anyway, so it'd save me that time. And of course, while I was dreaming, I could imagine my hubby walking on the treadmill while I did my circuit. Yeah, right. Part of the problem is all we do in the evenings is watch TV. I'd love to shoot that thing. Really, I would. I know I like some shows we watch and I enjoy a good comedy or cooking show...but I really wouldn't miss it. I know I'd be so much more productive, both in the fitness world and in my homemaking. Why is it so hard to do the things we know we need to do...and even want to do?! And why am I here typing when I could be getting this done? Oh, wait...the two munchkins in the other room...that's why. I can't do anything until they are snuggly in bed. We're working on it.

I am working on my next training plan. My family will be doing the White Rock Marathon Relay in December. I'll have one of the 10K legs (or something close to it). I'm going to stick with something pretty close to what I did for my last 10K since it went well. I do want to amp up the speedwork and get that strength training going. The biggest obstacle is the Susan G. Komen 3-Day smack-dab in the middle of my training. I'm just not sure how long that will sideline me, if at all. I don't want it to, but I have a feeling it will to some degree. Blisters? Pain? Exhaustion? All of the above? The unknown is the hardest.
Posted by Christy J at 6:18 PM No comments:

Race for the Cure 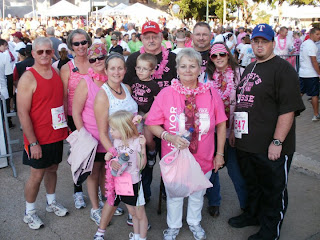 Just one year after my mother-in-law's diagnosis of breast cancer, we walked as Patsy's Posse at this year's Race for the Cure. Amazing. Awesome. The whole family was in on the walk, 1-mile of family support. Grammy's two sisters, one niece, two grandkids (with one more cheering us on), husband, sons, my parents, and I all participated in RFC for her.

After the 1-mile walk, we stretched and warmed up for the 5K. With a 10K just two weeks ago, I just wanted to run strong. And I did. I finished in 31:30, which is actually my fastest yet. I wasn't in it for speed...but I was still a little disappointed that I didn't hit the 30 mark. My parents, on the other hand, rocked! My mom finished in 25 something and my dad was less than 30 seconds behind her! He tends to be faster, but I don't think he was feeling good today. She turned 50 in March...and I hope that when I'm 50, I can run a sub-30 5K! Heck, I hope I can do that by 40!

Even though I'm a little disappointed with my time, I realize that I ran a strong race, passed people, and did just fine. So much better than last year. And progress is progress.

The only drawback is that after the race I came way too close to passing out. I was on my way to grab an orange or banana and ran into someone I knew who I stopped to talk to...and I could barely focus on her face or words. Dad was with me though, so I knew if I hit the ground, I'd be fine :) I didn't though...but I did find the closest curb and took lots of deep breaths. The best I can figure out is I stopped too soon and my breathing became more "normal" before my body was ready for it to.

I did try some Power Bar Engery Gel Blasts in rasberry...two at the half-mile point because I just wasn't feeling strong. About a mile later, I felt them kick in. It wasn't anything magical or crazy, just a little kick of energy, enough to boost my confidence and move my legs.

I also carried a new water bottle. I've been carrying a water bottle for a while now and really like it. This one by Nathan has a strap with a pocket, perfect for those chews. It worked well.

I guess there was more than one drawback, I found that I had blisters again. I never had any blisters with my old shoes, even if they did remove two toenails. And now, with both my new pairs, I am getting them just about every run. Well, actually, that's not true. I didn't get any until the 18-mile training walk 3 weeks ago where I got many blisters at mile 2. Since then, I've gotten them after most runs. I let the fluid out on Tuesday, and babied them with some antibiotic ointment and band-aids, but they're back like a bad alien movie. They are coming up in the exact same spot every time...inside heels right where the bottom and side of my feet meet. I can feel the hot spot in the Asics, but I don't feel anything coming up in the Saucony shoes. I'm baffled but need to get this figured out before the 3-Day.
Posted by Christy J at 3:14 PM No comments:

My, how things have changed

It's the night before Race for the Cure, and it's got me thinking about several things (although how my kids can behave so badly and be so cute is not really connected to this event...it's on my mind too).

1. Just a year ago, we were waiting for results on tests for my mother-in-law...and of course, just the week after Race for the Cure, we found out that she did indeed have breast cancer. She's had a mastectomy and is doing very well...no radiation or chemo was needed, luckily. We will all be walking in her honor as Patsy's Posse for the 1-mile tomorrow...my hubby, kids and extended family included...before I run the 5K with my parents, sister (if she's not sick), sister-in-law and a few others.

2. Last year at the Race for the Cure, I was recovering from hip issues and couldn't run the entire thing. And now, 3 miles is a basic run for me. I'm not in tomorrow for speed though since I did a 10K just two weeks ago. But I'm looking forward to the run!

3. I'm not as nervous as I usually am before a race. Maybe it's because I really haven't had time this week to think about it. Maybe it's because it's "just" a 5K (and I know that not that long ago, that was a huge deal to me!). Maybe it's because I'm considering this a recovery after the 10K. I don't know why, but I'm ok with just heading out for a run tomorrow. I love being outside hitting the pavement and am looking forward to it!

Isn't it amazing how fast we forget where we were not that long ago?! Change may be slow, but it's happening. I'm stronger and, even though I'm still slow, faster. I'm more confident and comfortable.
Posted by Christy J at 6:42 PM No comments: