We didn't think we were going to be able to do anything big for Spring Break, but my hubby was able to get away for a few days. We took the trailer to Fort Richardson State Park for a couple of nights, and really enjoyed getting away from it all for a bit.

Wednesday
We left a little before lunch, stopping for a few last-minute items on our way out of town. We got to camp and paid for the rest of our reservation. There were a couple of park rangers in the office, and one said that site 51 had just been cleaned up and had a nice area. I'm glad he was there...the site was great! We got a shelter site, knowing we'd have a little more room and privacy in those sites. This one was even better because the table and fire ring were behind the shelter. Perfect! 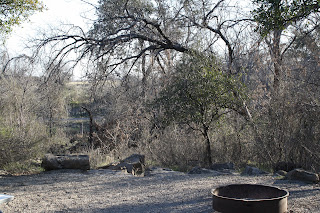 While Chad was setting up the trailer, I started lunch. I'd already done most of the work at home, so heating up our cheesy sausage sliders was easy. After lunch, we took a hike, more than an hour and a half of walking, hiking, and exploring, including the old fort buildings that were open for once. We let the kid play at the playground before heading back to camp. 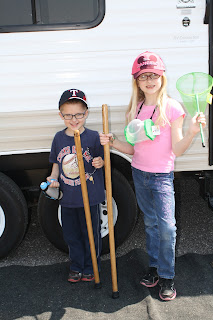 For dinner, we had steak (for us) and ham (for the kids) with the bbq sauce the kids and I made earlier, pan-fried potatoes, green beans and my sauteed tomatoes with bread. It was so good! I don't usually eat steak, but it hit the spot. Of course we had to have s'mores afterward.

Thursday
No one woke up super early, which was nice. I headed out for a hilly 3 miles. My legs felt heavy, but I made decent time. I had to wear a pair of Ryan's gloves I found in the trailer because I didn't think to pack cold-weather gear. I ended up taking them off as it warmed up quickly. After my run/shower, we had breakfast burritos. Then we headed into town. The kids had ice cream at a soda fountain in the local drug store. We picked up a few more things we needed at the store. Back at camp, we had walking tacos for lunch (again, did the prep work at home). 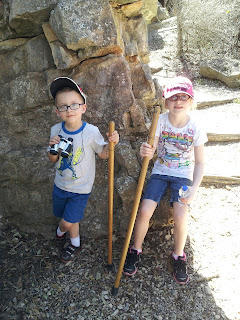 I took the kids for a "short" hike the other direction on the trail below our camp while Chad rested for a few minutes. Then, when we got back, we drove to another trail and hiked it for almost an hour. The best part is we found the rumbling spring the trail is named for, and I remember finding it when I was younger camping there with my family. Instead of walking back on the trail, we took a detour up some rocks (a little scary, but ok) and ended up going through someone's campsite to get to the road. It was a fun hike, all in all. 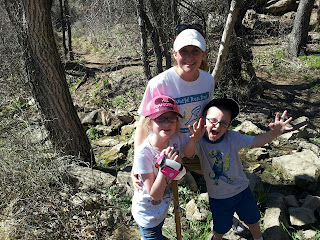 We went back into town for ice cream, stopping to look at and test drive a truck, which we took to the DQ. Unfortunately, they were cash only, which we didn't have. We went back to camp and fixed some burgers for dinner before heading back into town for that ice cream. On the way back into camp, we stopped at the playground and played "All squirrels change trees," which is a game my family used to play at that very same park. After that, we sat out as the sun set and watched the stars come out.

We were all in bed by 9, although we stayed up watching tv for quite a while after that.

Friday
Chad woke up at 6:30, but I wasn't quite ready to wake up. He took the tv outside and sat and watched the news, letting me sleep until 8. The kids slept even later. I have to say, it was funny to open the door to find him bundled up in his jacket watching tv outside. It was so nice to sleep in! We had eggs in a basket and bacon, cooked outside by my hubby. We had to tear down camp, but we managed to play a couple rounds of ladder ball with the kids too. 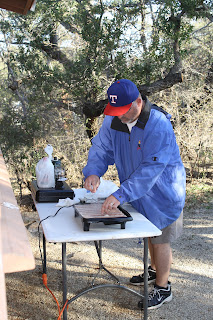 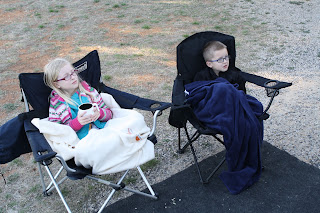 This just makes  my heart smile... 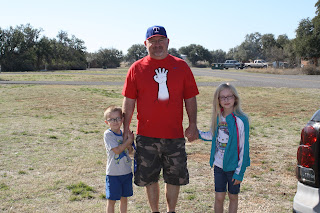