Trapped in the house = cooking

Yesterday, I attempted to make homemade pretzels. Ok, attempted isn't the right word because they were delicious! I used this recipe: Butter Soft Pretzels. I followed it pretty closely, but I did take the advice of one reviewer and started with 4 cups of flour with the intention of adding more if needed. However, it didn't need more. My dough didn't want to rise, but it worked anyway. I was really impressed with the dough...very smooth and stretchy. I was also impressed with the baking soda/water dunk before baking. It really did make a crispy crunch on the outside. I doused mine in melted butter as they came out of oven and sprinkled them with a cinnamon/sugar mix. I did one with salt, but with this dough, I'd stick with the sweet. They were really, really good...as in, I think I ate 3 or 4 of the dozen I made. 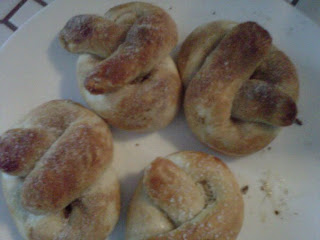 I'm sure we'll tackle another recipe right now, but first, we're going to do some crafting. I'm getting all the crafty stuff out and letting the kids play away. We'll see what they come up with :)
Posted by Christy J at 8:19 AM

Email ThisBlogThis!Share to TwitterShare to FacebookShare to Pinterest
Pin It Now!
Labels: recipe