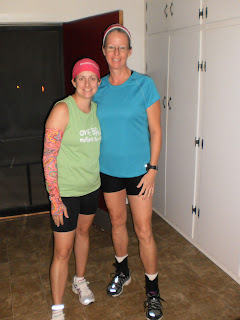 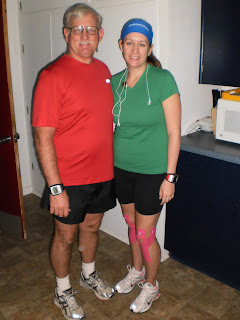 This morning, I drove in to Archer to run the Shortgrass Scamper 10K route with Mom before the race next weekend. The route is a little confusing, so I think she wanted me to run it once so I could help direct people if needed during the race next weekend. I'm not sure how much good I'll be at that. The course is hilly, so I was pretty pleased to run it in 1:05:31 this morning. I won't break 60 minutes and reach my goal for this year, but I knew that would need to happen in the spring. It's been too hot to worry too much about speed. It has finally cooled off, and I'm loving the cooler morning temps!

It was nice to have company, especially considering the company was my Momma! She typically runs much faster than me, so she pushed me (even though she didn't mean to) to go a little faster than I would have otherwise.

My sister ran the 5K route with my Dad this morning. They both did an amazing job! I just wish I could be that fast!

I had to laugh at my horoscope this morning. I don't always read it and I definitely don't live by it, but I saw it later this morning. Here's what it said: 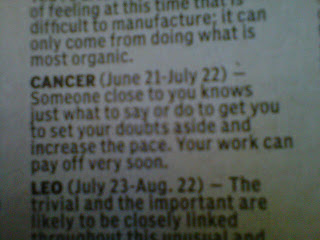 Mom would be one of the "someone close" people, like with this morning's run...the other is Chandra. I ran knowing she was running her own 10K this morning (and rockin' it, I might add!). We were actually probably running at about the same time. I liked that thought. And I was sending her happy running vibes as best I could. She's such an encouragement for me! When I get frustrated by my slowness (which is often) or life in general gets me down, she's right there for me. I love that we get to run Vegas together!

Speaking of which, it dawned on me this week after seeing it mentioned on another runner's blog that the Vegas half is quickly approaching! In fact, it's just 84 days away! Yikes! Training really picks up after the Shortgrass Scamper next week. Here we go!