I'll backtrack a little bit. With the start of school and a family emergency all in one week, I've been a little delayed in getting this post out. 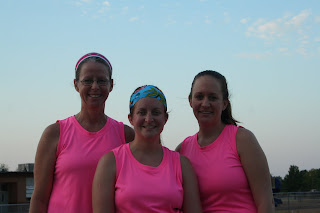 This past Sunday (yes, the day after our 21-mile bike ride), my mom, sister and I met up to run our Moms Run This Town Road ID: It's All About Me Virtual 5K. We've never all run together, so this was exciting for us.

My sister is just 7 weeks post-partum...amazing, isn't she?!

It was really fun to have running partners for once. We got to catch up and just visit for a while, something that rarely happens with the just the three of us. We followed Carrie's lead in a run/walk pattern so she didn't push it too hard. The funny thing is we finished in the same time it took me to run the last virtual 5K (yes, running the whole thing).

We started at 6:15 and tried to take some pictures. It's still dark at 6:15, by the way. We moved to the patch of light near the school across the street so we could take some pictures.
﻿﻿
One neat thing about the virtual 5K is that, instead of bib numbers, we were asked to write a goal for ourselves. Mine was pretty generic...Be a good example. I had in mind my daughter, my family and my students when I wrote that. It wasn't very specific, but I think I'm afraid of specific goals...something like "run a sub-60 10k" means I might fail to reach that goal. It's so very black-and-white, and I don't like that.

The run itself was good. It was already hot outside, but it was nice to have running partners...and especially these ladies! We got to reflect a little on our running. Carrie has been running the longest, at almost 5 years. I started about 2 1/2 years ago, and Mom is starting year 3 about now. Pretty cool!

We stopped when we reached our 5k and walked back to Mom's car and took a few pictures, which would have been entertaining to watch if you'd been walking by. We wanted a picture of all three of us, so we had to experiment with propping the camera up in the back of Mom's car and using the timer. It was worth a laugh of two to see me scramble in and out of the back...and I consider myself lucky that it didn't catch a picture of my butt.

Because Mom is training for her first half marathon, she needed 6 miles. I had 5 on the schedule, so I took off with her. I thought I might make the next three with her, but I peeled off after two and let her finish on her own. Frankly, after the bike ride, I'm just glad I could run at all. I know she wanted to run around a 10:00 mile pace (which is her slow, easy pace), but that wasn't so slow for me. We ended up running a little slower than that, but it was neat to run with my mom.

She just amazes me! She and my dad recently completed their first tri, where she won first in her age division! They'll be riding in the HHH this weekend as well. Very cool.

This week has made me appreciate both my parents and my in-laws even more (and let's face it, just about anyone I care about more). My father-in-law ended up with a blood clot on his brain and had emergency surgery to repair it last night. It has been a scary couple of days, but God is good. When we got to the hospital this morning, Big Daddy was sitting up eating his breakfast and having some coffee, making wisecracks to the speech therapist who was there. That made my heart smile.

While I would never wish this kind of situation on anyone else, it has been amazing the outpouring of love and support we have received this week. Our phones haven't stopped ringing and beeping, buzzing or blinking. We've had so many offers for meals and help. It definitely makes you hold your loved ones closer. I am so thankful for all of our blessings and couldn't ask for better friends, a better community or a better family. ﻿
﻿
Posted by Christy J at 7:03 PM